Articles on Morality and the Law of God

Ethics is the branch of Christian theology that deals with moral principles. These moral principles concern the Law of God and the commands of Christ. “Ye shall not add unto the word which I command you, neither shall ye diminish ought from it, that ye may keep the commandments of the LORD your God which I command you.” (Deut. 4:2). And, “And why call ye me, Lord, Lord, and do not the things which I say?” (Luke 6:46).

Along with Gospel Worship, this is the best work Burroughs ever penned. It is one of the best puritan works you will ever read on coming to Christ.

Thankfulness to God is not just about saying “Thank you for who You are and what You have done in Christ.” It’s about obeying God’s commandments. Did you know that?

How do you reconcile the Law of God (what God’s commands are for the Christian church) and the Gospel (the free grace found in Christ)? Antinomians (those against the Law of God) have attempted for centuries to annul the Law…

This is one of Edmund Calamy’s most powerful works on delighting in the Law of God no matter what afflictions may come. Here we find Christ is our ALL. This is Puritan Preaching at its best.

Are you ready for Reformation to occur? Thomas Ford says that you must not only be ready for it to occur, but that you must be settled to see it through to the end. This is EVERY Christian’s duty.

Jonathan Edwards on the Nature of True Virtue

Christ or the Lodge? by Orthodox Presbyterian Church
A paper outlining the results of a study conducted by the OPC of secret organizations and especially Masonry and its related organizations. The committee concludes that “Masonry is a religious institution and as such is definitely anti-Christian”.

Moses’ Law for Modern Government: The Intellectual and Sociological Origins of the Christian Reconstructionist Movement by J. Ligon Duncan III
This paper was written by Ligon Duncan, a professor at Reformed Theological Seminary in Jackson, MS. Though from a more sociological perspective, it is a critique/overview of Theonomy, a particular view of ethics.

Wholesome Severity Reconciled with Christian Liberty by George Gillespie
Should the civil magistrate enforce both tables of the law of God? G. Gillespie states in a Wholesome Severity, “I have endeavored in the following discourse to vindicate the lawful, yea necessary use of the coercive power of the Christian Magistrate in suppressing and punishing heretics and sectaries, according as the degree of their offense and of the Church’s danger shall require.”

The Law of God by Scott Bushey

The Barren Womb and IVF Part 1 by C. Matthew McMahon

The Barren Womb and IVF Part 2 by C. Matthew McMahon

The Teleological Suspension of the Ethical by C. Matthew McMahon

For Whom Was God’s Law Intended? by Dr. Greg L. Bahnsen

The Law of God and Ethics by Scott Bushey

Taming the Tongue by Scott Bushey

On Christian Modesty by Scott Bushey

A Biblical Perspective on Abortion by Ed Walsh

A Letter To Paul Hill by Gary North

The Sanctity of Life by Scott Bushey

Speech Against Abortion by Alan Keyes

Behind the Scenes of an Abortion Clinic: Ex-Director Speaks by Carol Everett

An Abstract of the Laws of New England by John Cotton (1641)
An eye-opening glimpse into the early Puritan theocracy.

Some Thoughts on Theonomy by G. I. Williamson
The author offers his views on the issue of “Theonomy”, a hotly debated topic in Christian ethics. CRTA feels that his article offers a good perspective on this difficult topic.

The Law and the Saint by Arthur W. Pink (PDF)

Sanctity of Life by Scott Bushey

The Christian and the Theatre by Samuel Miller (Sermon on Theatre Attendance) (1812).

Thomas Brainerd’s Sermon on the Influence of Theatres (1840).

God and the Gay Christian by Al Mohler (PDF)
A response to Matthew Vine’s homosexual viewpoint (Vines teaches that the bible does not teach God’s condemnation against the sin of homosexuality and sodomy).

The Biblical Offense of Racism by Douglas M. Jones III

Population Growth as Blessing or Blight? by E. Calvin Beisner

The Other Shoe: Copyright and the Reasonable Use of Technology by John M. Frame
This paper, published in Antithesis magazine, examines the nature of copyright law and suggests improvements that would allow for a more “reasonable” use of photocopy technologies for copyrighted materials. This issue is indeed ethical — Romans 13 binds the conscience of Christians to follow copyright laws.

The Christian Sabbath: Its Nature, Design and Proper Observance by R. L. Dabney
From, Discussions of Robert L. Dabney, Volume I, pages 496-550.

The Fourth Commandment by Charles Hodge
From his Systematic Theology, In Three Volumes. – Vol. III, pp. 321-348

The Fourth Commandment by James Durham

The Westminster Assembly’s Position on the Lord’s Day

Check out these books on the Lord’s Day at Puritan Publications. And these books:

The True Doctrine of the Sabbath, by Nicholas Bound
Moral Law and the Covenants, by Anthony Burgess
The Christian Sabbath Vindicated by Daniel Cawdrey and Herbert Palmer
The Commandments of God, by Edward Elton
God’s Holy Mind, by Edward Elton
An Exposition of the 10 Commandments, by Ezekiel Hopkins
An Abstract of the Duties Commanded and the Sins Forbidden in the Law of God, George Downame
The Law Unsealed, James Durham
The Sermons of John Calvin on the 10 Commandments, by John Calvin
The Commandments, John Dod
Sunday a Sabbath, John Ley
A Defense of the Christian Sabbath, John Wallis
The Moral Law Expounded, Lancelot Andrews
A Brief Exposition of the Ten Commandments, Patrick Simon
The Lord’s Day, Thomas Young
The Sabbath’s Sanctification, William Gouge
The Christian Sabbath Defended, William Twisse
A Profitable Discourse on the Sabbath Day, Zachary Ursinus
Sin, The Law and the Glory of the Gospel, by Joseph Bellamy
The Lord’s Day, by Joseph Pipa
The Ten Commandments, by Thomas Watson
Theses Sabbaticae, by Thomas Shepherd
A Treatise on the Law and the Gospel, by John Calqhoun
Call the Sabbath a Delight, by Walter Chantry
Celebrating the Sabbath, by Bruce Ray
The Lord’s Day, by Daniel Wilson
The Grace of Law, by Ernest Kevan
The Law of God, by William Plumer
The Worship of the English Puritans, by Horton Davies
The Worship of the American Puritans, by Horton Davies
Calvin and the Sabbath, by Richard Gaffin
Hebrews, Volume 2, The Name, Original, Nature, Use, and Continuance of a Day of Sacred Rest, [Pages 265-460], By John Owen
Discussions, Volume 1, [Pages 496-550], by R. L. Dabney
Systematic Theology, by [Pages 351-357; 366-397], by R. L. Dabney
The Works of Jonathan Edwards Volume 2, 3 Sermons on the Perpetuity and Change of the Sabbath, [Pages 93-103] by Jonathan Edwards
The Marrow of Theology, [Pages 112, 283-284, 291-295, 298] by William Ames
The Collected Writings of John Murray, Volume 1 [Pages 205-225] and Volume 3, [Pages 34-35; 43, 49, 72-73, 75-76, 101, 108], by John Murray
Institutes of Elenctic Theology, Volume 2, [Pages 1-37; 77-100] by Francis Turretin
Institutes of the Christian Religion, Volume 2, [Book 2.8.29ff], by John Calvin
Systematic Theology Volume 3, [Pages 257-275; 321-340], by Charles Hodge
The Works of Richard Baxter, Volume 3, [879-926], by Richard Baxter
The Works of Ezekiel Hopkins, Volume 3 [Pages 236-267; 364-387], by Ezekiel Hopkins
Paul, An Outline of His Theology, [Pages 99-100; 106-107; 130-158; by Herman Ridderbos
The Sabbath Defended, James Milligan 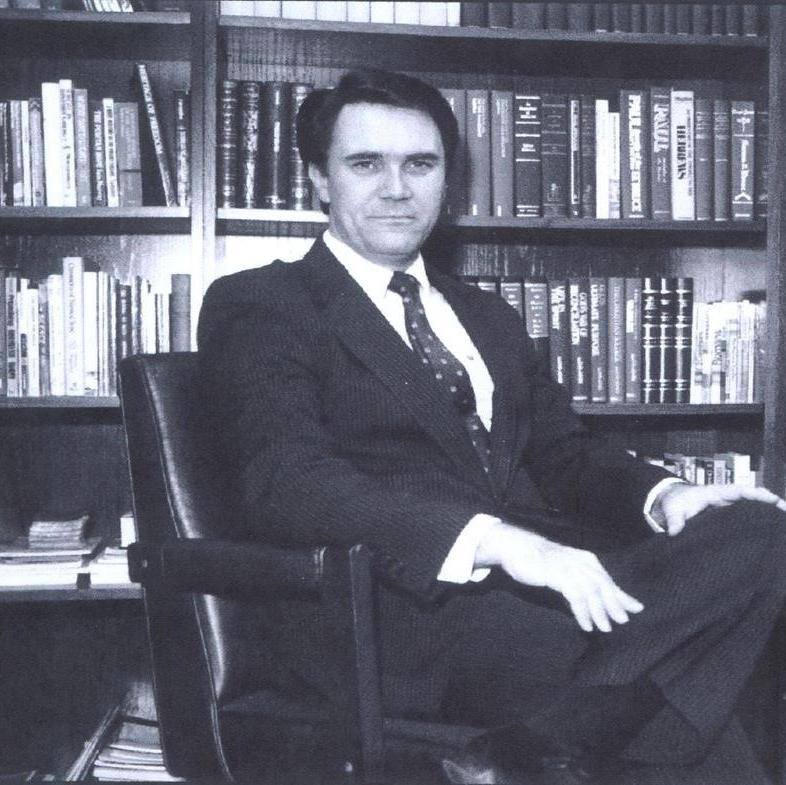 Greg L. Bahnsen (September 17, 1948 – December 11, 1995) was an American Calvinist philosopher, apologist, and debater. He was a minister in the Orthodox Presbyterian Church and a full-time Scholar in Residence for the Southern California Center for Christian Studies (SCCCS).

PE041-“God’s Law and Gospel Prosperity: A Reply to the Editor of the Presbyterian Journal”, (distributed by the Session of St. Paul Presbyterian Church, Jackson, MS, 1978)

PE058-“Theses on Divorce and Spousal Abuse”, [written for Special Committee of Presbytery] 1984

PE119-“Cross-Examination: The Unchanging Character of God’s Law-Part 1”, The Counsel of Chalcedon XIII:4 (September, 1991)

PE152-“Pre-marital Sexual Relations: What is the Moral Obligation When Repeated Incidents are Confessed?”, 1992

PE181-“Biblical Policy on Keeping Covenant with God in the Education of Our Children”, Penpoint Vol. V:3 (April, 1994)

PE182-“In the Shadow of Sodom: Does the Bible Really Say What We Thought About Homosexuality?”, Christianity & Society Vol. 4:2 (April 1994)

PE192-Extemporaneous responses by Dr. Bahnsen to written criticisms and critical questions over his thesis: Theonomy in Christian Ethics, (1978)

Join our mailing list to receive the latest news and updates from our ring of reformed sites.

Keep up to date on new articles, new reformed and puritan books, and coupons for purchasing some of the best reformed literature in print!

You have Successfully Subscribed!